The Honey Badger Project does not address critical issues in the Hayden Creek watershed. Sedimentation is entering the creek at an alarming rate from FS437. The USFS agrees that attention to the watershed is overdue. Members of the work group took a field trip recently. Read what they found below.

Shawn Hathaway, Gil Rossner and Geoff Harvey of the HLWA Board were joined by Carl Petrick, Forest Supervisor, Kim Pierson, the Assistant Forest Supervisor, Dan Scaife, Coeur d’Alene River District Ranger, and Jason Smith, district recreational specialist for the trip.  The group met at 10 AM Friday, April 29th at the Sportsmans Access Parking Lot.  The Forest Supervisor and Assistant Supervisor had only an hour and a half to spend on the trip.  The trip started with an overview of Hayden Lake and its water.  The parking lot provided a view down the lake to Henry’s Point facilitating a discussion of the lake’s dual water quality nature.  The point was made that we must protect the lake’s water quality and the special sensitivity of the lake north of Henry’s Point.  The point was emphasized that the Forest Service manages 63% of the lake’s watershed. Careful management of the forest land is important to the lake’s water quality.

The group moved up to the Hayden Creek Shooting Range.  The typical array of shot up solid waste and shell casings was found covering the range.  The spring conditions and the recent snowpack runoff clearly demonstrated where the range drained directly to Hayden Creek.  All participants agreed that the situation was unacceptable.   The forest supervisor indicated that measures were required immediately to block drainage from the area to Hayden Creek.  The Forest Service reiterated its earlier stated intention to halt all target shooting in the Hayden Creek watershed within a quarter mile of the road except for the gun range.  The agency is also exploring management of the range with representatives of the National Rifle Association and Fernan Rod & Gun Club.  The Association’s representatives reiterated its position that somebody was needed to manage the site.  The forest supervisor indicated that would only be effective if somebody was on site regularly.  The Association again reminded the Forest Service its position that FSR 437 be closed west of the range and converted into a 50 inch minus trail between the range and Ohio Match (FSR 206) junction. The Ranger indicated the road west of the range was not needed to manage the forest.  Josh Nelson indicated that range users would resist, because they could not carry in all their gear to the range.

The group drove on up to the Ohio Match Junction.  The fact that the road and creek met each other in between was noted and the forest managers acknowledged they had observed that in transit.  The Associations plan to place a parking area on mud bogged areas was noted as was the very small length (500 yards; 0.3 miles) of the fifty inch minus trail proposed.  The close connection of the road and the creek was given as a prime reason for this approach.  Carl and Kim had to return to town at this point.

The remaining group proceeded up to the road above the upper FSR 437- Ohio Match Junction.  A stop was made along the road where it drains directly to the creek.  The out sloped road requires in sloping and drain water management.  Ranger Scaife noted that Honey Badger proceeds could be used to make these improvements.

The group moved on to the NF Hayden Creek Junction one of many shooting areas passed with facility damage and litter.  The trip participants assisted Ranger Scaife in collecting stream discharge and collection of water quality samples.  Data and samples were collected from the North Fork and East Fork above the confluence.  The group traveled on up to the Hells Canyon Trailhead and data and samples were collected from Hells Canyon Creek and the East Fork Hayden Creek.  The area just below the trailhead was once treated with float logs from an earlier dock cleanup to discourage mud bogging. Such logs were offered to treat additional areas from the Watershed Improvement District’s dock removals.

The group drove back down to the road west of the gun range.  A stop was made to show one of the worst locations where road runoff drains directly into Hayden Creek.  A final stop was made near the property boundary where another set of discharge data and water quality samples were taken.

HLWA Continues to Engage with the USFS

The Honey Badger Project public input period is closed and the USFS has moving forward with their plan. However, the Hayden Lake Watershed Association will continue to work with the them on critical issues in the watershed we believe were not addressed in the final Honey Badger plan. 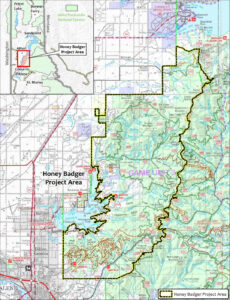 Years ago, the Forest Service planned its timber harvest activities in sale sizes up to maybe 1500 acres.  In recent year the agency has moved its planning to much larger units. Typically, management is planned for tens of thousands of acres over many years.  Such plans do not just plan the timber harvest of the area, but also road creation and destruction (decommissioning), controlled burning of forest stands, trails, and stream protection and restoration.  In short, most every management action the agency can foresee over a twenty-to-thirty-year time horizon. The Honey-Badger Planning Project is just such a large area (60,000 acres) planning effort that has been in progress for three to four years.

Honey-Badger is important to those of us concerned for the welfare of Hayden Lake, because 63% of Hayden Lake’s watershed is managed by the Forest Service and all that acreage is being planned for in the Honey Badger Project.  It should not be lost on any of us that the quality of Hayden Lake depends on the proper management of its watershed from whence its waters flow.  The HLWA has tracked this project since its announcement by the agency and has provided input at every step.  You may review our comments and concerns in the documents provided below and see the materials supplied by the Forest Service to which we have reacted.

It might be simple to comment that the Forest Service should just leave the lake’s watershed alone.  Yet we must understand that the forest ecosystems that populate the watershed are not static, but are themselves in constant long-term flux.  The natural long-term behavior of our mixed coniferous forests is to grow from massively burned over areas, producing initially young fast growing sun loving trees, but as time progresses slower growing, more shade tolerant, more disease susceptible, and greater biomass stands develop.  Left to its own devices such forests eventually encounter a dry year and one or many ignition sources that create stand replacing wild fires. Such fires recur roughly every 300 years in this area. The 1910 fires legendary in this part of the Northwest are the best-known example of one of these stand replacing conflagrations.  Fire history information tells us the forests of Hayden Lake’s watershed suffered their last stand replacing fires in the 1750s.  Our lake’s watershed is near due.  So we manage it wisely through management efforts charted by the Honey Badger planning to forestall such an event or we face a massive conflagration that we surely affect the lake over many years.