The Hayden City Council voted unanimously to reject the proposal to move the Honeysuckle Beach boat launch Tuesday evening. Each council member as well as the mayor explained their reasons for opposing the move. They agreed that city resources would be better spent on creating the best possible Honeysuckle Beach experience for the local community. Improved facilities and safety were at the heart of the discussion and the council will be creating a new priority list, including increased parking fees for out-of-staters in the future.

Thank you to all who sent emails to the city, filled out comment forms and showed up at the meetings. Regardless of your position on this issue, it was important that the City of Hayden hears from local community members. Local government is at its best when it hears from an informed public.

The Hayden Lake Watershed Association sent a letter in response to the presentation on the Honeysuckle Beach and Boat Launch project by Welch Comer to the Hayden City Council.

There were about a dozen other residents in attendance to also hear this update.

Melissa gave a 30-minute big picture overview of her report which was followed by questions from council members. While the report seems fairly balanced listing the pros and cons of each option, Jan and I both felt Melissa's presentation favored moving the launch.

Councilman DePriest asked about the cost of the project so far which was estimated at $30,000 and the cost for the studies on Honeysuckle Bay which were estimated at up to $200,000.

Councilwoman White asked about the proposed location of the boat launch parking lot and what is currently there. This suggested to me that she is not familiar with the area and a site visit should be organized for the Council to see the limitations of this location.

Councilman Saterfiel asked why to increase the size of the parking areas when they will only fill up with the increased demand. Melissa answered the aim was not to increase parking areas but to separate competing activities for a better user experience.

City Administrator Brett Boyer made a comment at the end about taking what we have and making it more efficient.

Mayor Forssell called for a vote which passed to accept the report for further study and emphasized that no decisions had been made. 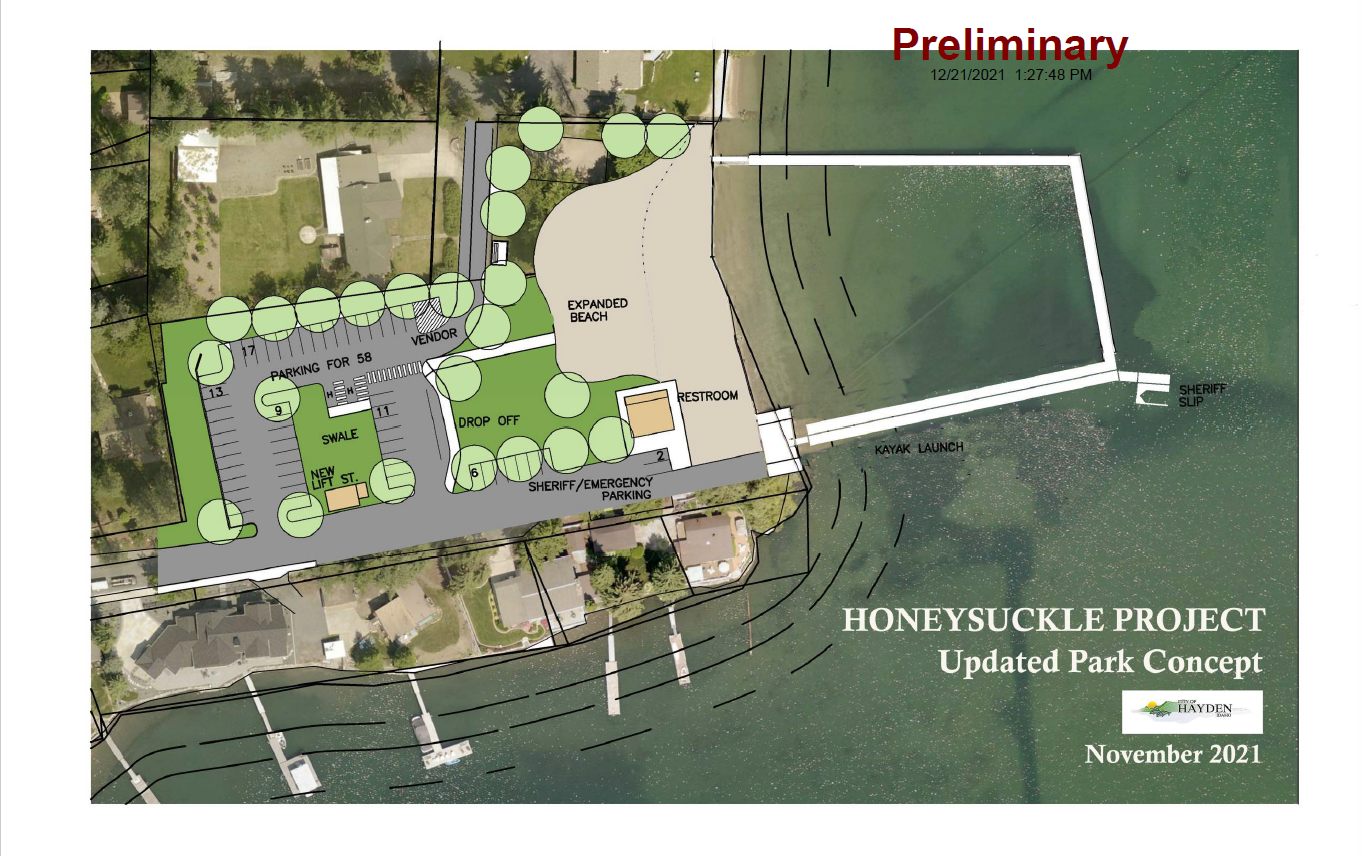 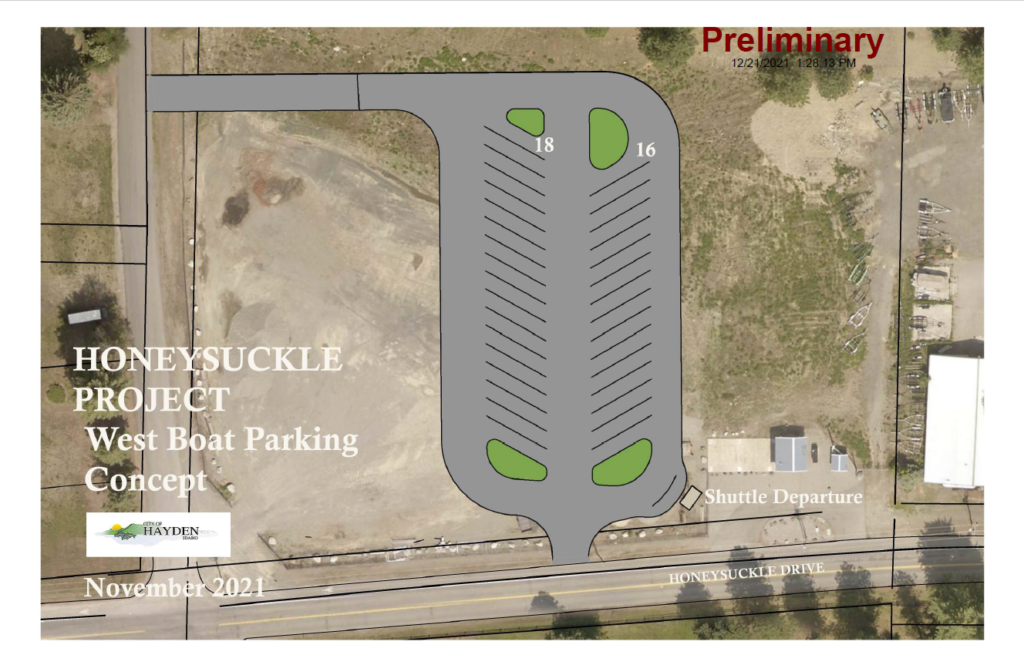 The video above gives us birds eye view of the proposed boat launch site. We wonder how much dredging would be necessary to provide year round access.

“The waters of Hayden Lake drain into the bottom substrate in the area between the Hayden Lake Country Club and the Rim Rock formation to the south and drain down to the aquifer.” (from Hayden Lake: A Brief Primer - Geoff Harvey)

Potential damage to the lake bottom structure could reopen the whirlpool that was plugged in the early 1900s.

The photo below highlights an environmental hurdle facing the project. The green line that runs parallel to Hayden Lake Road is Feller Ditch constructed as flood water infiltration gallery. It is designated as a wetland that is the first line of defense against flooding. Click on the photo to see a larger image. 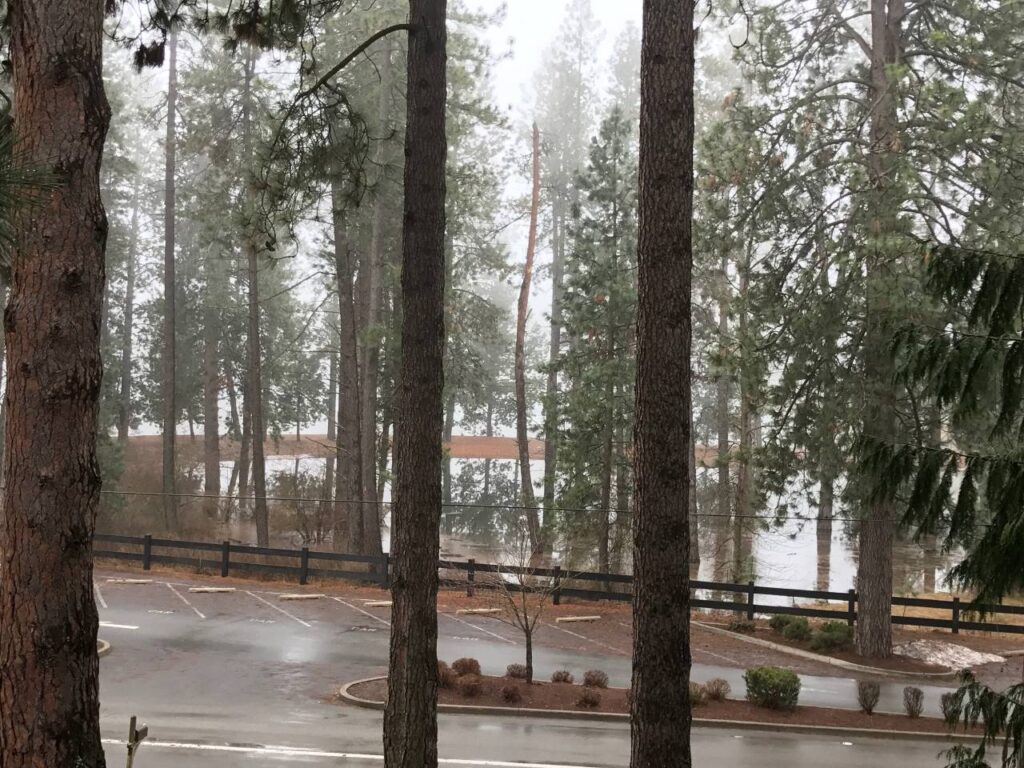 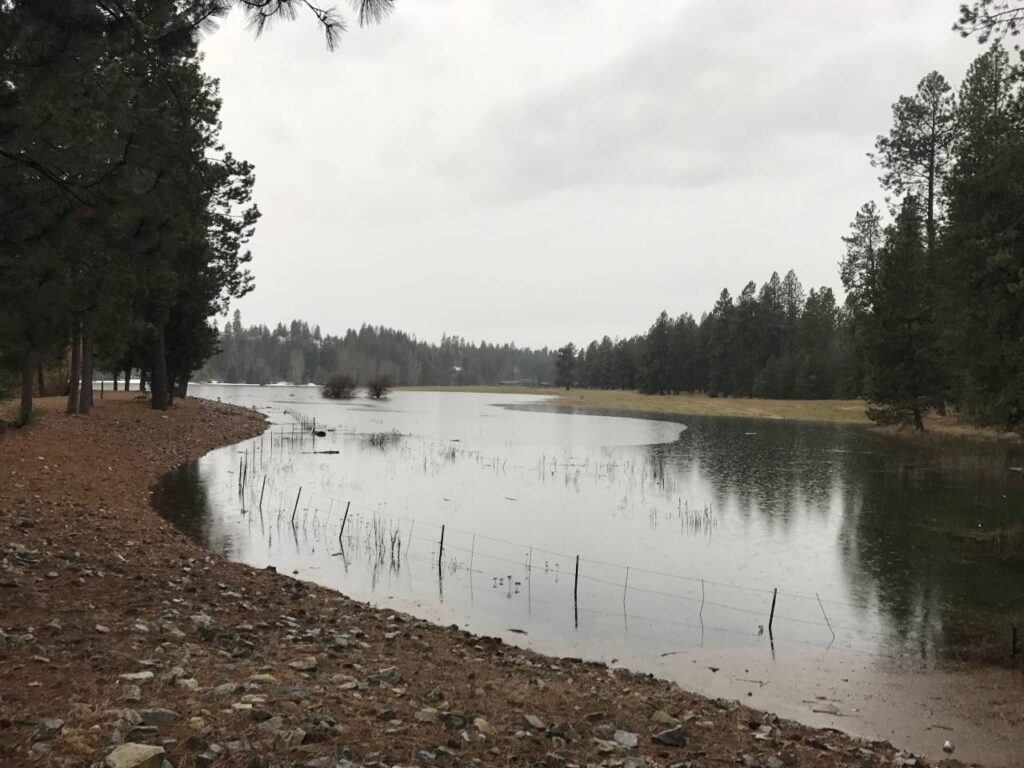 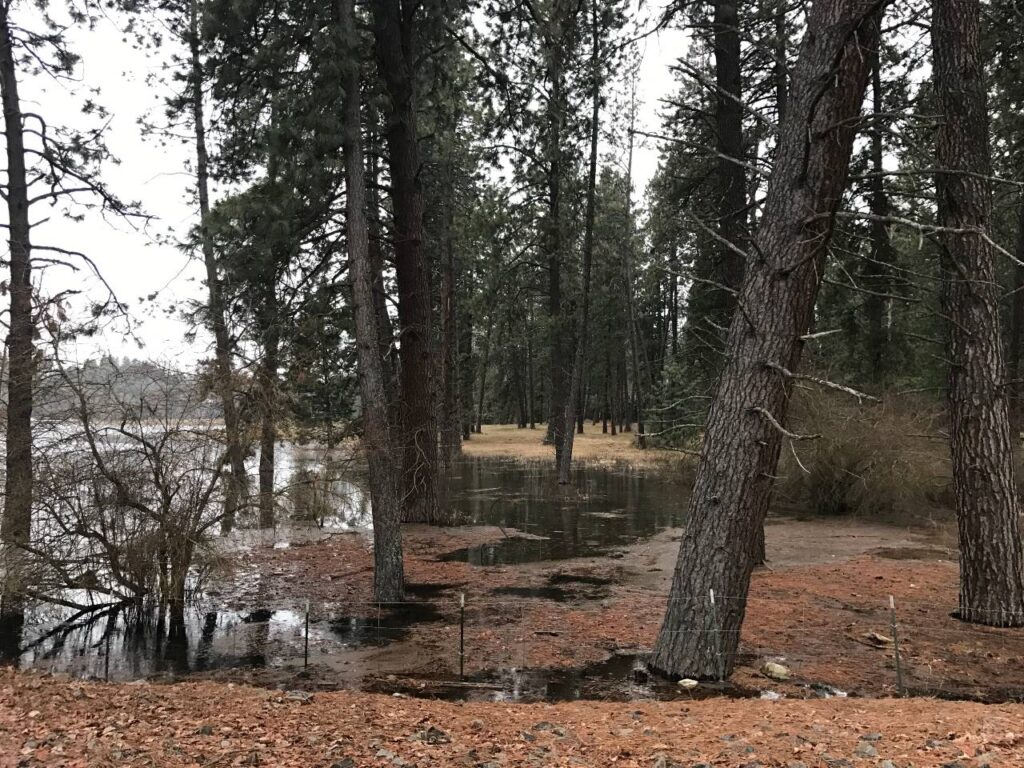 The current proposal is the result of the City of Hayden’s desire to improve user experience at the Honeysuckle Boat Launch and Public Beach.  Those surveyed and the sheriff’s marine patrol division reported stressful interaction between boaters and beachgoers.

The current proposal is in early planning stages.  The city representatives recognize that there are many issues that will need to be addressed.  Our concern is that those issues get sincere consideration, and that there is not a rush to accept the first proposal that appears to have some limited merit.

When the city decided to try and separate the conflicting uses, they first tried to relocate the beach area along the dike.  This idea was shot down by the ID Department of Fish and Game and IDL which prohibits the importing of sand due to interference with fish gills.

They then began looking for alternative launch sites close to the urban area and the city’s current park and found that Dalton Irrigation owns a 5-acre strip of land that runs west from the dike parallel to E. Hayden Lake Rd. This site is bordered by the Richards Conservation Trust lands, which also contain identified wetlands.  The site is the dike’s overflow channel.

We are concerned that by paving this area they will eliminate a vital flood control outlet.  Many of us can recall when the whole conservation area was covered several feet deep with overflow water as far west as Finucane Farm. Remediation will be costly, maybe impossible.

The proposed parking lot will also add additional congestion to an area of E. Hayden Lake Rd. which is already difficult to get through in the summer months.  The problems will be magnified if excess boat trailer parking is allowed on the roadway. We are concerned that emergency vehicles trying to get to the east side of the lake would be further hampered by traffic snarls exacerbated by ingress and egress at the parking lot.

For residents that could be trying to flee from a wildfire on the lake’s east side the traffic gridlock could be deadly.

The new site will only accommodate forty trailers.  The city is planning auxiliary parking in a city owned parcel near the intersection of Strahorn and Honeysuckle Ave. with a shuttle back to the launch site.  That additional parking would accommodate thirty-four trailers.

The city has stated that they do not intend for this new configuration to increase the current number of boats launched into the lake.  We do not believe that the city has an accurate understanding of how many boats are launched from Honeysuckle.  Over the past 3 years the HLWA has distributed over 5,000 flyers on boat trailer windshields, and our daily numbers are higher than the city’s.  An accurate accounting would be necessary.

The launch construction at the new site also presents difficulties.  Honeysuckle Bay has recently been designated as a no wake zone for the enjoyment of non-motorized sports such as kayaking, canoeing, paddle boarding and swimming.  If a new boat launch were to be installed in the bay it would greatly diminish the tranquil experience for those wishing to participate in these non-motorized activities.  The city and some of the participants say they are committed to keeping as much of the Bay no wake as is possible.  We are skeptical that this can be achieved without buoy channels and strict enforcement.

Because of the shallow nature of the Bay at the dike, dredging would have to be done to allow for bigger boats.  There is speculation that driving piers and dredging the porous and fragile lake bottom at this location could increase the leakage from the lake into the aquifer, many of us are not convinced that the dramatic lower lake water levels last summer were due only to lower snowpack, higher temperatures and increased irrigation draws.  An increase in the water flowing into the aquifer is a possibility that should be taken seriously while further study is done.  Any action that could increase the current leakage should be undertaken with extreme caution and detailed study.

The HLWA has suggested that the city consider alternatives.  Board member Barb Neal suggested that the city add a splash pad/water park at Finucane Park, (which has ten acres,) similar to the one at McEuen park in Coeur d'Alene.  In Barb’s words, “there would be easy access and lots of parking for families wanting a water experience.”  In addition, shuttles could run from parking at Finucane to Honeysuckle Beach for those that want to go to the beach.  The idea of making Finucane a family recreation area and moving sporting events to Croffoot Field has long been in the City of Hayden’s Master Plan.

HLWA also feels that the city should create the overflow parking area for boat trailers at the city gravel pit now in order to get boat trailer parking off of Honeysuckle Ave. and expand the number of rigs that could park there.  The city could then reserve parking on Honeysuckle Ave for vehicle use only and create a safe walkway for pedestrians to use from their vehicles to the beach.

We can report that the Open House at Hayden City Hall was packed and the dialog robust. Thank you to all those in attendance. The opportunity to contribute your input will continue until February 11th. Take action with the three links below:

Read the article by Devin Weeks in the Coeur d'Alene Press

And check this website for updates on the status of the Honeysuckle Beach and Boat Launch project as well as news you can use from the Hayden Lake Watershed.