The Hayden Lake Watershed Association has partnered with community members that started this initiative to create a safe space on the lake for non-motorized recreation.

Background:  Honeysuckle Bay is located in the extreme southwest corner of Hayden Lake.  The bay is defined as that area west of a line running due south 0.23 miles from the point of land immediately south of the Honeysuckle Boat Ramp to Hayden Lake’s south shore (Illustrated in Figures below).

·       If the no-wake speed designation were set at a line extending south from the Honeysuckle Boat Ramp’s two hundred feet markers to the south shore, the designation would encompass a little over 37 acres or 0.96% of the lakes surface area.

·       Based on existing wake rules, an estimated 9.5 acres of the bay are available for wake speed travel.

Honeysuckle Bay is shallow, averaging no more than six to twelve feet in depth.  The bay is shallow because it resulted from the 1910 impoundment of Hayden Lake by the dike and sealing of the previously porous bottom of the area, causing its year-round inundation.

·       Prior to impoundment and whirlpool area sealing efforts, the area now covered year-round by the bay drained by early to mid-July into the Rathdrum Prairie Aquifer.

·       Historical accounts indicate most of the bay was used as a summer hay field.

·       Wake speed and excessive wake recreation in this bay will stir up bottom sediments, potentially causing future water quality issues or bed erosion that might jeopardize the current seal in the bay bed. 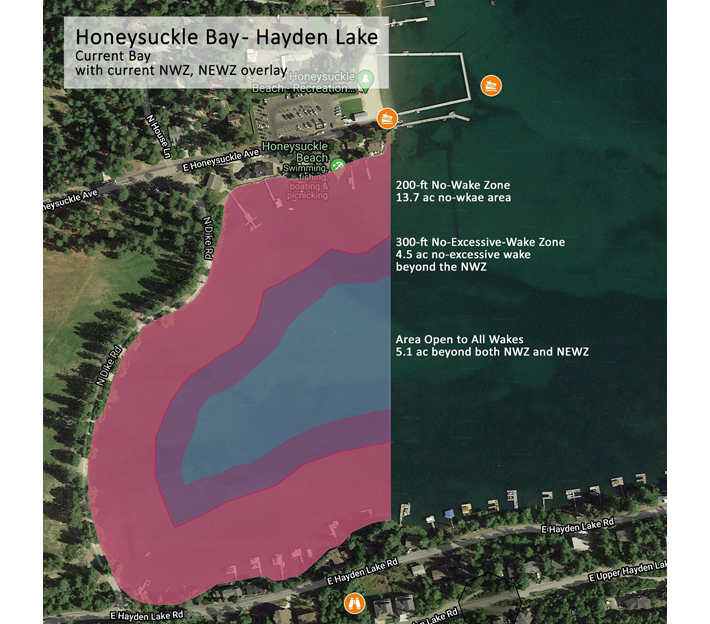